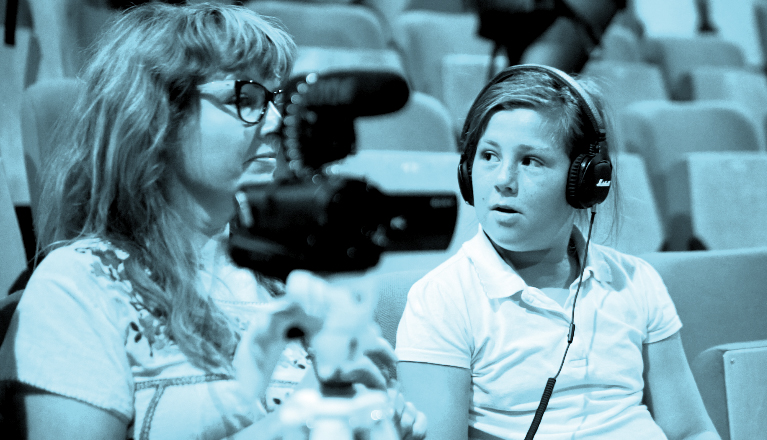 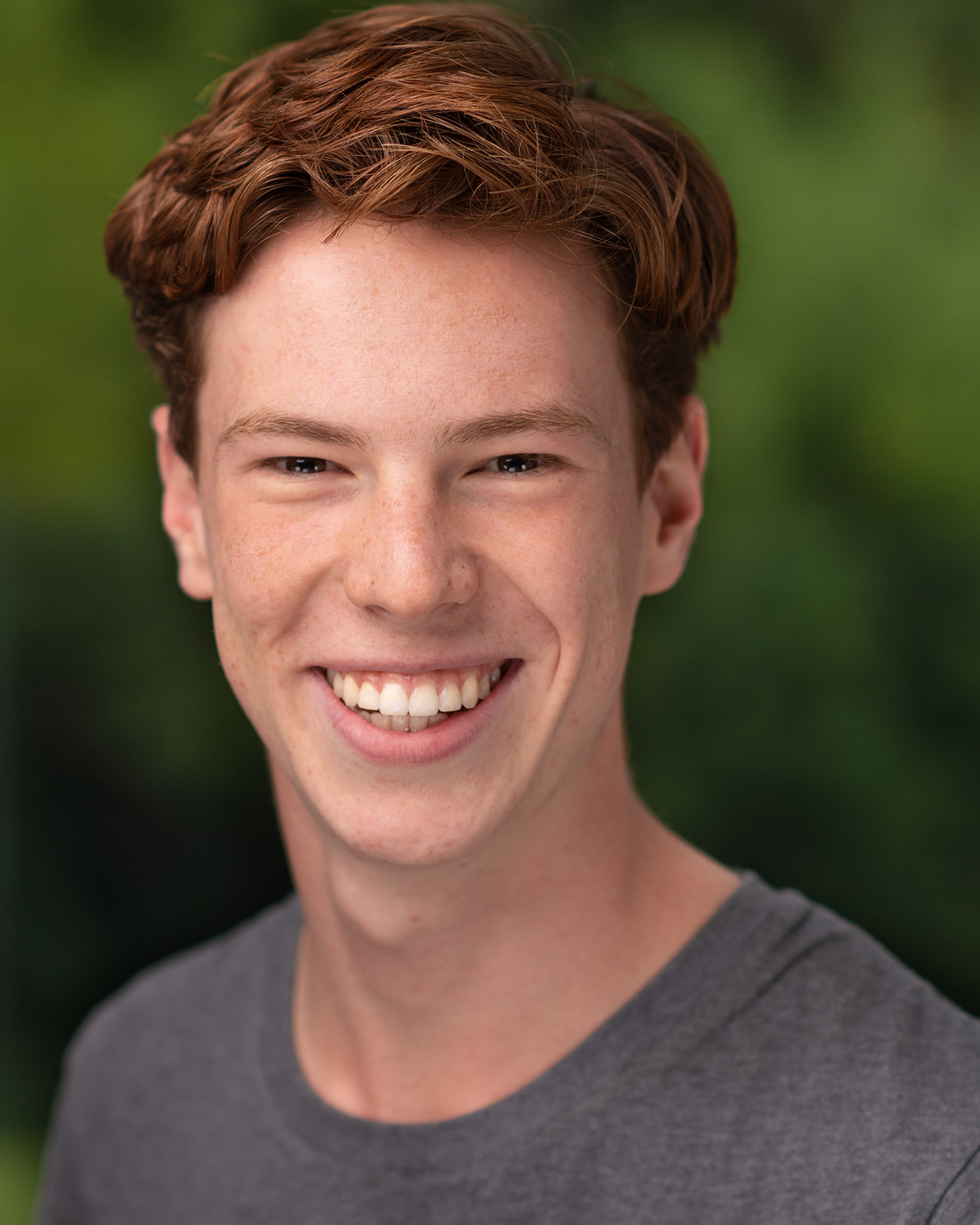 I became aware of LOOKOUT in my first year of college when I was offered a spare ticket to attend a show that the LOOKOUT project mentees in the year above me were invited to. Louise and James explained the project to me; it sounded very exciting and I knew that I had to get involved as soon as I was able to the following year. I signed up and was assigned my mentor, Victoria Melody. Vic is a theatre-maker and performer who has a unique and thorough working process with which she devises her shows. She immerses herself in a particular community or culture — from funeral director to beauty queen — and uses her experiences to create her productions. Immediately, Vic and I made a great connection; she was very open, encouraging and keen to help me try things that I had little experience in before.

I am at the beginning of pursuing an acting career and Vic was able to help me with ideas about performance, but also encouraged me to write my own material. This was not something I had particularly considered before but, with Victoria’s help, I devised a short piece for the LOOKOUT virtual sharing. I kept a journal of my experiences in (the first) lockdown, which we then adapted into a short film.

One of my favourite aspects of being involved in LOOKOUT was the theatre productions that we went to see. The first show we saw was Roots by the company ‘1927’. It was a fantastic piece of theatre which incorporated animated projections with live action and music. There were so many different elements to it, and the show felt like it was really relevant to all of us as mentees; whether into visual arts, design, performance, music or the technical elements of production. However, the most exciting part was attending a workshop with the cast and crew the following day, where we got to see how it was all put together!

LOOKOUT allowed me to make many connections; both with those already established in the creative industries and also with my contemporaries. It was great to meet and collaborate with people my age also pursuing creative careers, but each interested in different disciplines.

The project inspired me and has helped me to continue and develop my creativity. Working with Victoria gave me more confidence in writing and I have recently begun a writing project with my cousin, composer Joel Hall, on musical adaptions of stories by our grandfather, playwright and author Willis Hall. LOOKOUT helped me to grow as a performer too, and after completing the project I have continued to take steps forward in my acting career – for example learning more about performing on set by working on a TV series as an extra, signing to The Young Actors Agency and auditioning for drama schools. 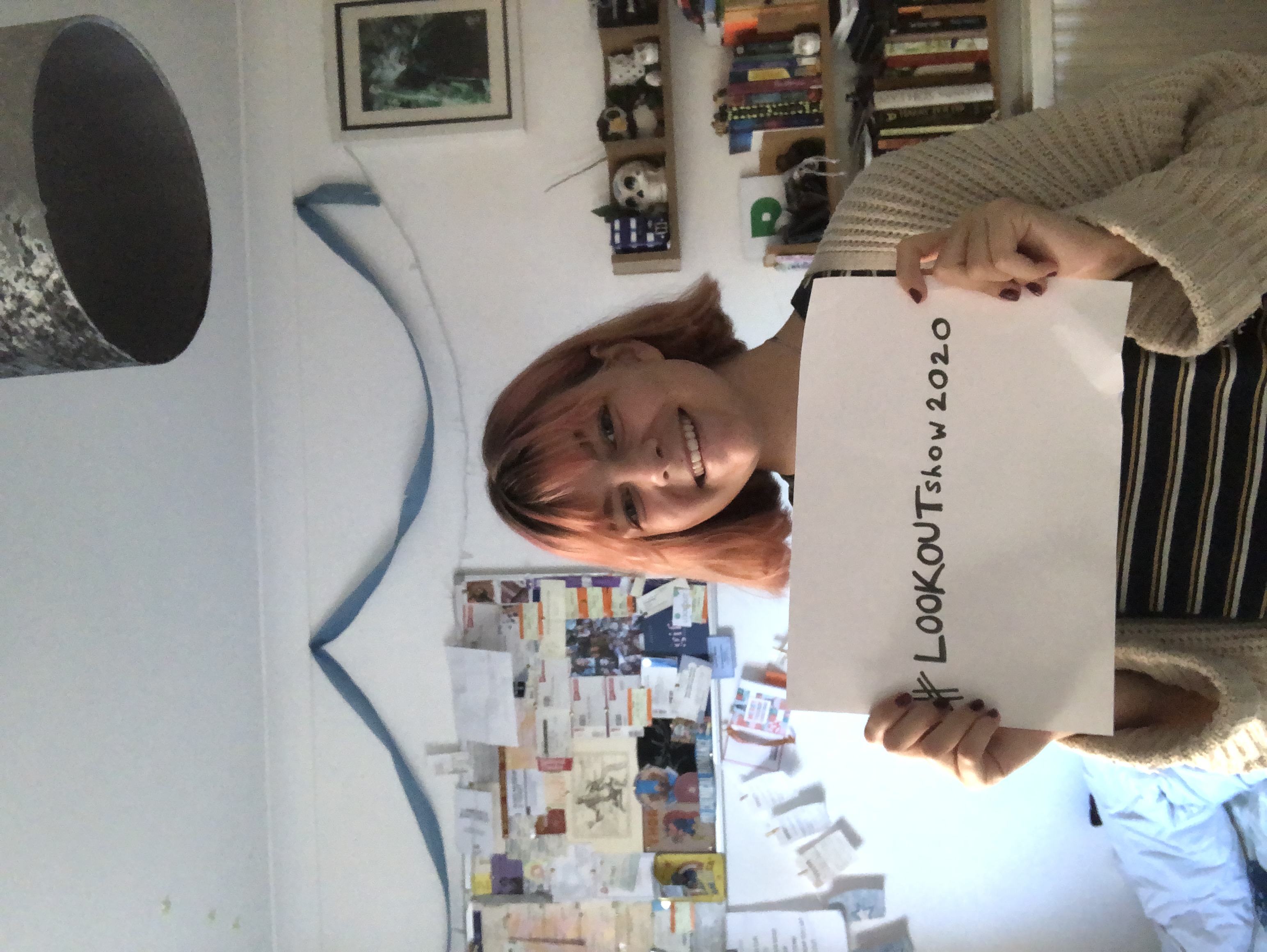 Enrichment day at BHASVIC was coming hauntingly near. I had already changed my first A-Level before I started, already changed what I had decided I wanted to do in life and was already behind in deciding what to do for enrichment. The signup sheet loomed on the entrance to the drama studio. First aid was instantly a no go, too much fake blood. Creative writing was too close to drama but too far from chemistry. Huh? A talk from a BBC journalist, ok, now you have my interest. What about a talk from a lady called Louise? From LOOKOUT? I’ve never heard of that but given it was hosted in my secondary home of the drama studio, I thought why not.

Fast forward through the summer holidays and an email pops up in my inbox from a LOOKOUT insider called James Barton. Fast forward another 3 weeks and I was exchanging messages with the most bubbly and enthusiastic person I had met in my life, Fern Berreen, who became my mentor with LOOKOUT for the year. Later that month and I was haphazardly trying to find my way up to where I had set up a rather limited portfolio in the college house. I was in the process of finalising my designs for my drama set as well as brainstorming how to make my art book more interesting. Fern came up with the genius idea of sticking cardboard, fabric and plastics in my book; much like I had in my drama work. She noticed the overlap in my art and drama before I had even noticed it myself and from that moment my set design had leapfrogged into something larger than I thought I was capable of doing, or even what I thought was required of me.

We met up a few times after that as well, once in her work space. It was a horrifically wet November day and the trek from BHASVIC to Hove station felt longer than the 5 minutes promised by Google Maps. I arrived at the front door and trudged through to her desk where I saw the most fabulous array of glittered headdresses, painted juice cartons and all manner of abstract shapes from various materials. We dove straight in with the heat gun and began forming thermoplastics into fancy shapes and, as before, stuck this all into my sketchbook. My art teacher was most impressed by the annotations around the Worbla shapes and asked if I was going to use this in my final piece. Unfortunately, Corona quickly put a stop to that; but the malleable plastic always held a place in my portfolio (and my heart) from then on.

Coronavirus and the subsequent lockdown quickly and tragically cut short my time with LOOKOUT, but as ever the determination of the arts pushed through and as a result of quick drop offs from Charlotte and immaculately planned zoom rehearsals from Louise, the live show was on. I was asked to be a live host and my need to interact in real time with real people overrode my innate stage fright, so before long I was stood in front of my laptop, which was perched on my chest of draws, drawing an anime character and trying to remember to look at the camera, not my prompt sheet. The hour and a half flew by in a bizarre display of manga characters, beat boxing, stop motion animation, and me trying not to dance and laugh (otherwise Bruce would beam my embarrassed face to everyone watching). Thank you to LOOKOUT for making a strange situation less scary for a while. 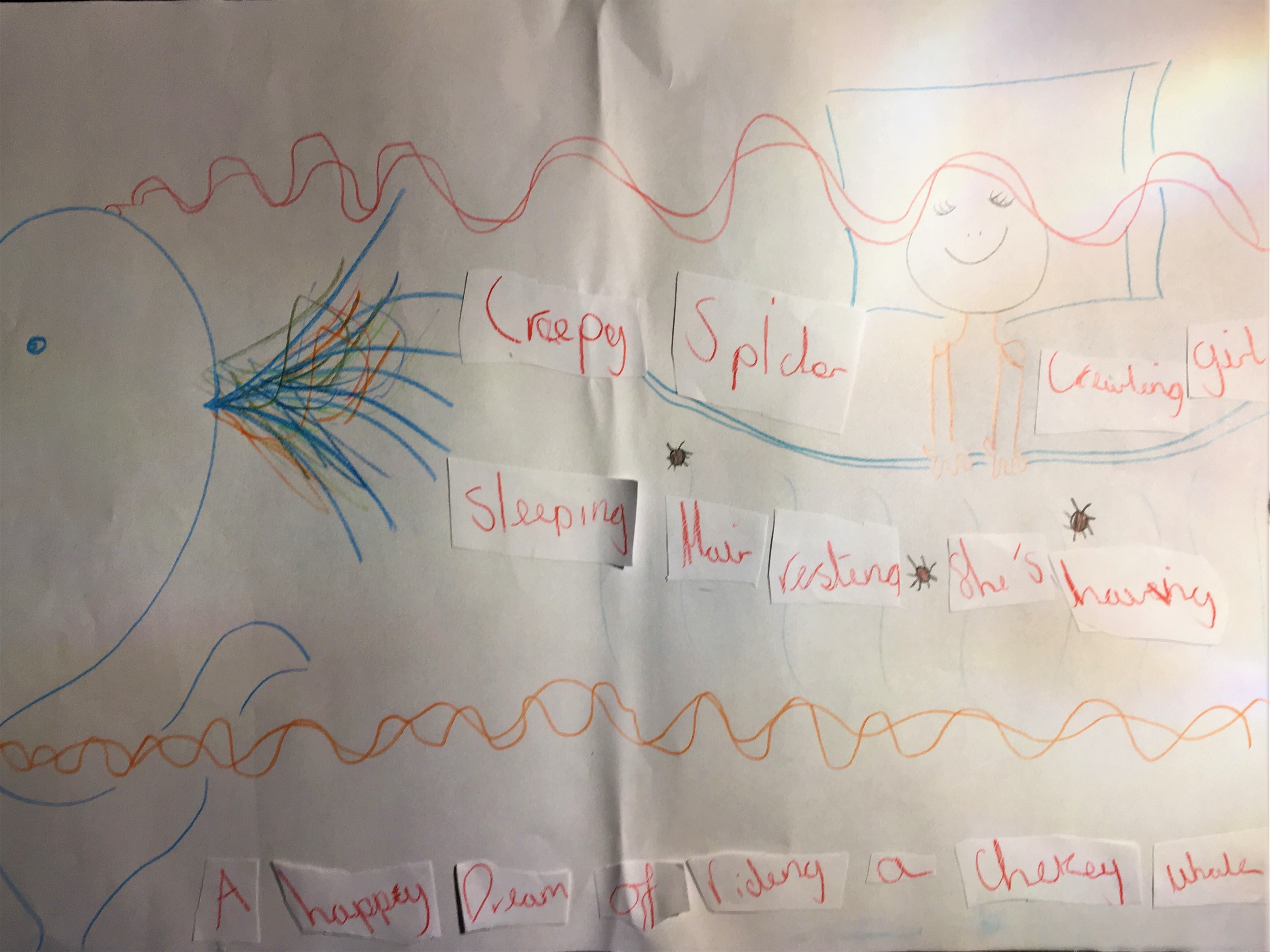 In 18/19 Ava worked with dance artist Anne Colvin and created this poem which was entered into competitions and we love it so we wanted to share it with you. 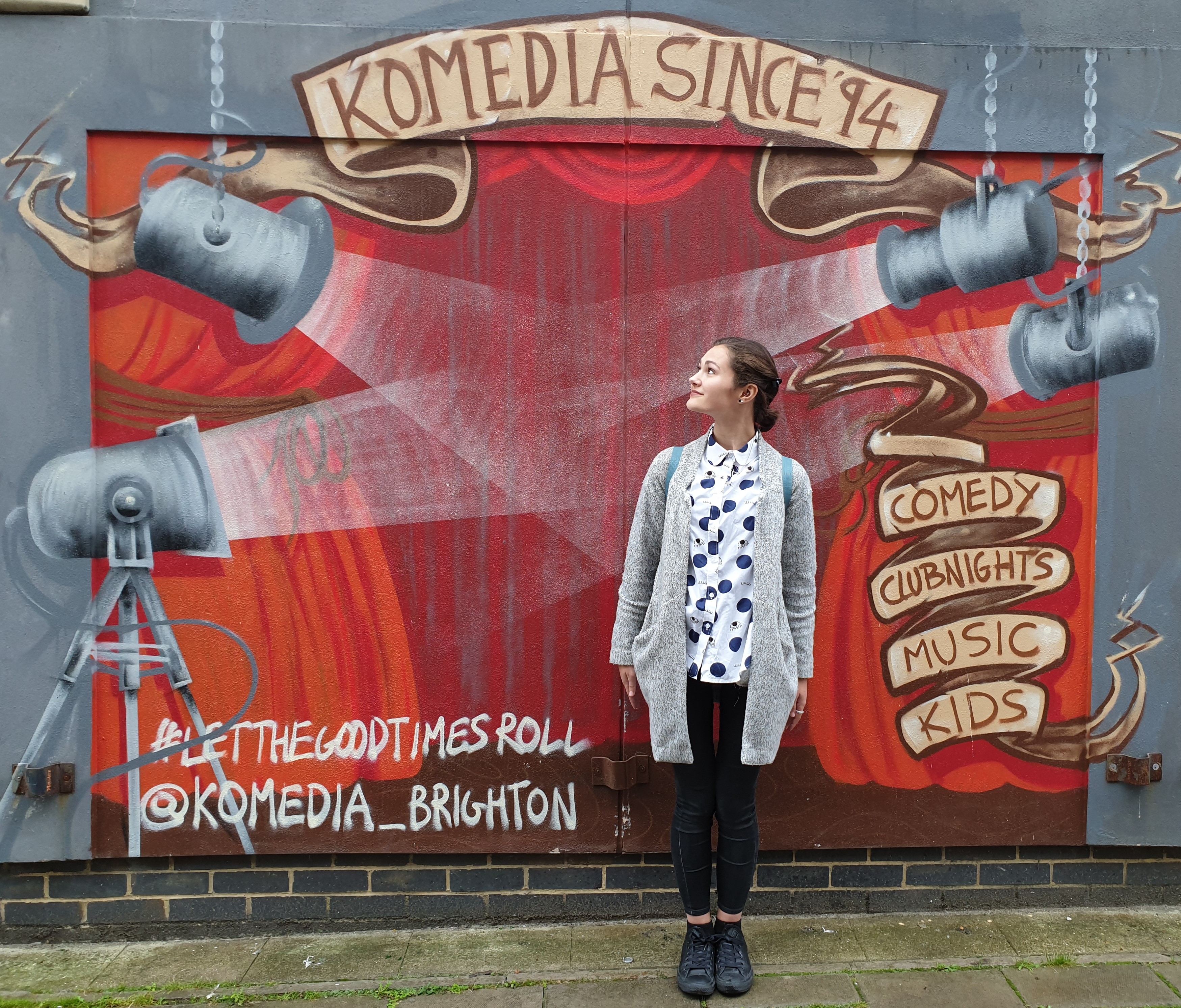 HEIDI DOWNING – Three weeks of work and wonder at Komedia

From phone calls with strangers to plastic mice taped onto remote control cars, the past three weeks have been anything but ordinary. When a member of Komedia staff spotted my new face, they asked what I was doing and when I explained I was doing work experience their response was “well everyday here is certainly an experience!”. It’s true. Although I knew there was a lot going on behind scenes at a theatre venue, I never knew how busy and complicated the process of making a show was until I got there and joined this process myself. I have spent the past couple of weeks doing an internship at Komedia Brighton, and have been lucky enough to spend a few days in each department; from box office to technical to operations to marketing.

On my first day at Komedia I was in the tech department helping out on a play called ‘Police Cops in Space’. I hadn’t had much experience in tech prior to this other than occasionally playing people’s soundtracks for A-Level drama performances (very incomparable to the professional world of show tech, I know!). After spending a day shadowing technicians I discovered that music, SFX and lighting cues can all be set up and programmed prior to the show on special equipment; in reality it’s a lot easier to be organised in this department than I thought. By knowing your sound desk well through practice and experience, any stress and responsibility in theory becomes minimal and manageable!

Despite having my internship in a comedy club, I hate to admit that I had never seen stand up before, and I certainly didn’t expect my first time to be alongside an audience of babies! One of the monthly comedy events that takes place at Komedia is targeted at parents with children under 15 months so they can enjoy afternoon stand up shows which allow them to bring their kids. For this show I was helping in operations so I had to baby-proof the studio, laying down rugs and soft play mats and sweeping up the floors to keep them clean and safe. During the performance I took some notes for a show report, which was essentially like writing a mini review (not that I’ve ever done this before) on each comedian. This later got typed up and saved to the company archives.

Box office was a contrasting department as it felt like in this department, I was constantly active and alert due to never knowing when someone is going to call or what they are going to say! My favourite department has to be marketing, and in the near future I will be returning to continue helping out in this department. Some of the things I enjoyed about marketing were being able to see the business side of social media and the different types of advertising a business can do.

One of the things I enjoyed most was the opportunity to see lots of the shows that go on at the venue; this was definitely a cherry on top of this action-packed internship. These last few weeks have enriched my knowledge of just how important each backstage roll is in putting on a performance. I can’t thank Louise from LOOKOUT enough for helping me set up this internship. I couldn’t have felt more welcome by Paul and the lovely team of staff at Komedia and I can’t wait to return.

This is your LAST CHANCE to sign up to this incredible programme. 2 spaces are still open 💜